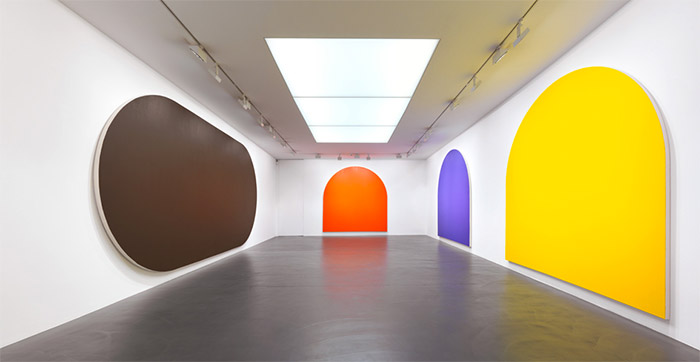 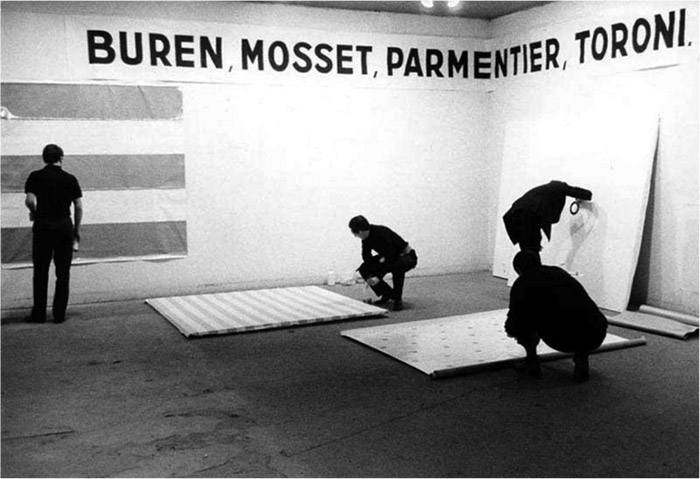 This exhibition marks the first critical examination of the significant, albeit brief, work of the BMPT Group, composed of Daniel Buren, Olivier Mosset, Michel Parmentier, and Niele Toroni in 1967. On Christmas night, 1966, Buren, Mosset, Parmentier, and Toroni drafted their first declaration, inviting the public to attend a demonstration at the 18th Salon de la Jeune Peinture, stating: “For the first time, on January 3, 1967, something will happen.” This event became the first in a series of “Manifestations”—events in various formats, at various locations in Paris. These events criticized the institutionalization and spectacularization of art as well as the public’s passivity, encouraging new modes of critical engagement that defied and denied older exhibition models. Coming out of the political tumult of France in the 1960s, the activities of the group were not hermetic, isolated occurrences, but rather a response to the particular intellectual moment, one defined by radical philosophy and social unrest. While the legacy of each artist has fallen under the rubric of painting, this strict classification ignores the conceptual, political, and performative impetus in deference to medium. This exhibition seeks to reexamine the BMPT group by placing its work in context with the broader conversations surrounding institutional critique, performance, and the role of painting as a political medium...

Olivier Mosset in The Brooklyn Rail

Review by Tom Mc Glynn in The Brooklyn Rail online.

Olivier Mosset isn’t really an abstract painter, because his paintings aren’t abstractly real. This might seem like a tautological game, but it is actually at the root of Mosset’s raison d’être. His recent show of monochrome works at Koenig & Clinton continues the artist’s longtime presentation of intimately actualized surfaces, proportional discretions, and subtle colorations that retain a fulsome sense of the real without being representational or subject to the burden of mimetic ventriloquism. His work is radically immanent in the best sense of the concept, a concept which states not only “what you see is what you see,” but, and more importantly, “what you sense is all that you will ever see.”... 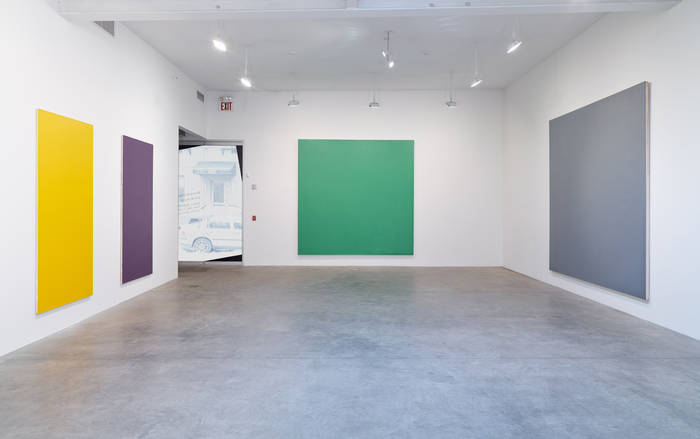 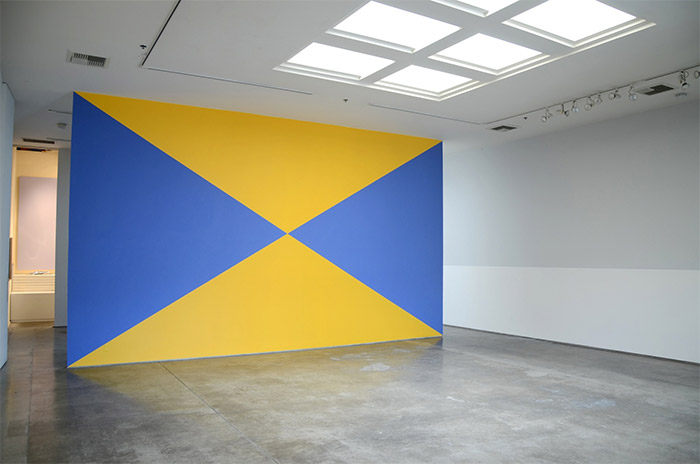 Olivier Mosset emerged in the 1960s and has since been associated with a multitude of art historical movements, involving himself in both the European and American artistic and critical contexts. In anticipation of many artists, who in the 1980s would use appropriation to critique Modernist authority, Mosset called into question the painter’s gesture and signature by sharing styles and dissolving authorship to reach a “degree zero” of painting. This line of questioning continues in this exhibition where he will present a wall painting composed of four yellow and blue triangles in the form of a motif found from a mural discovered in Cuernavaca in Mexico. In addition, a horizontal grey and white wall painting will extend the length of the nearly 45-foot wall spanning the Main and South galleries. Mosset’s paintings possess a strong materialist sense that recalls Malevich, Reinhardt or Stella while simultaneously maintaining a subtle relationship to the readymade and appropriation...