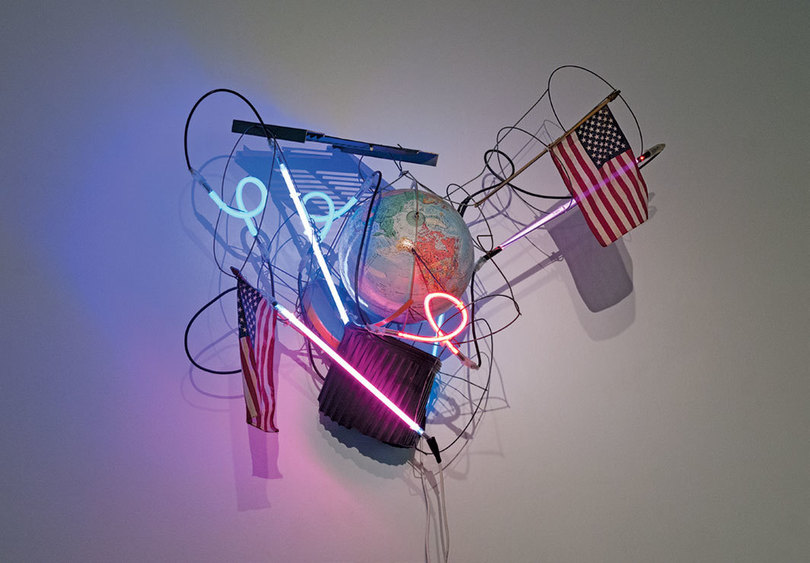 Review by Barry Schwabsky in ARTFORUM.

It comes as a surprise that "Keith Sonnier: Until Today," a selection of thirty-nine works made between 1967 and this year, really is "the first comprehensive museum survey to consider the arc of this iconic artist's achievement," as curator Jeffrey Grove writes in the catalogue. After all, Sonnier has been a renowned figure for five decades; by thirty he'd exhibited at the Stedelijk Van Abbemuseum in Eindhoven, the Netherlands, and at the Museum of Modern Art in New York. He also participated in legendary shows such as Lucy Lippard's "Eccentric Abstraction" at New York's Fischbach Gallery in 1966; "9 at Leo Castelli" (organized by Robert Morris) at New York's Castelli Warehouse in 1968; and, in 1969, both Harald Szeemann's "Live in Your Head: When Attitudes Become Form" at the Kunsthalle Bern in Switzerland and James Monte and Marcia Tucker's "Anti-Illusion: Procedures/Materials" at the Whitney Museum of American Art in New York. Sonnier was a protagonist of the burgeoning post-Minimal or "anti-form" trend then widely seen, in Lippard's words, as "opening up new areas of materials, shape, color, and sensual experience" in sculpture—casual and imprecise and unemphasized." This was the milieu in which such now-canonical figures as Eva Hesse, Bruce Nauman, and Richard Serra emerged. Why hasn't Sonnier been accorded similar prestige?... 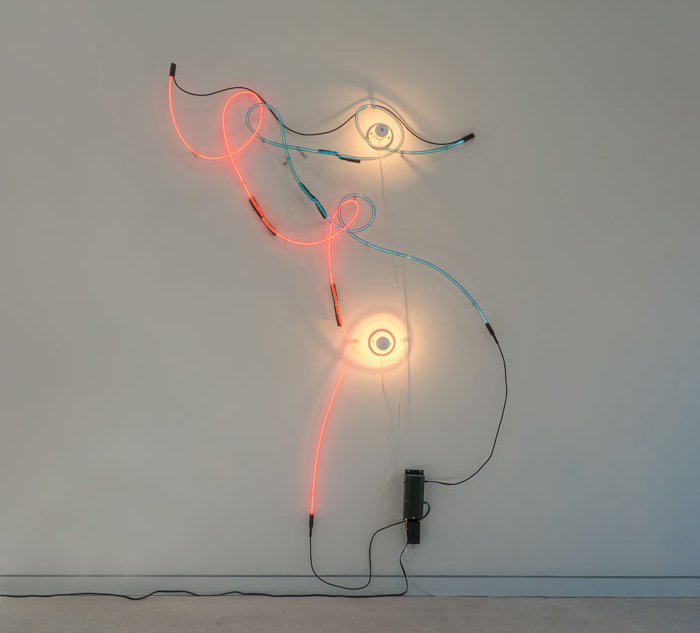 Keith Sonnier in The Brooklyn Rail

I first met Keith Sonnier several years ago on a party ship that was hired to follow a tugboat around Manhattan as it towed the first realization of Robert Smithson’s Floating Island. So it was a great privilege to spend some time with Keith at his home and studio in Bridgehampton recently and hear him reflect (as he does in this interview) on his friendships with Smithson, Nancy Holt, Donald Judd, Dan Flavin and many others, all while interweaving memories and stories of his childhood on the Louisiana bayou together with multiple insights into his own pioneering, original and joyful work in neon and other materials. I was accompanied by the Rail’s Publisher, Phong Bui, and Keith’s long time associate, Lesley Raeside. The interview concides with an expansive retrospective of Keith’s work at the Parrish Museum as well as a brilliant installation at the Dan Flavin Institute... 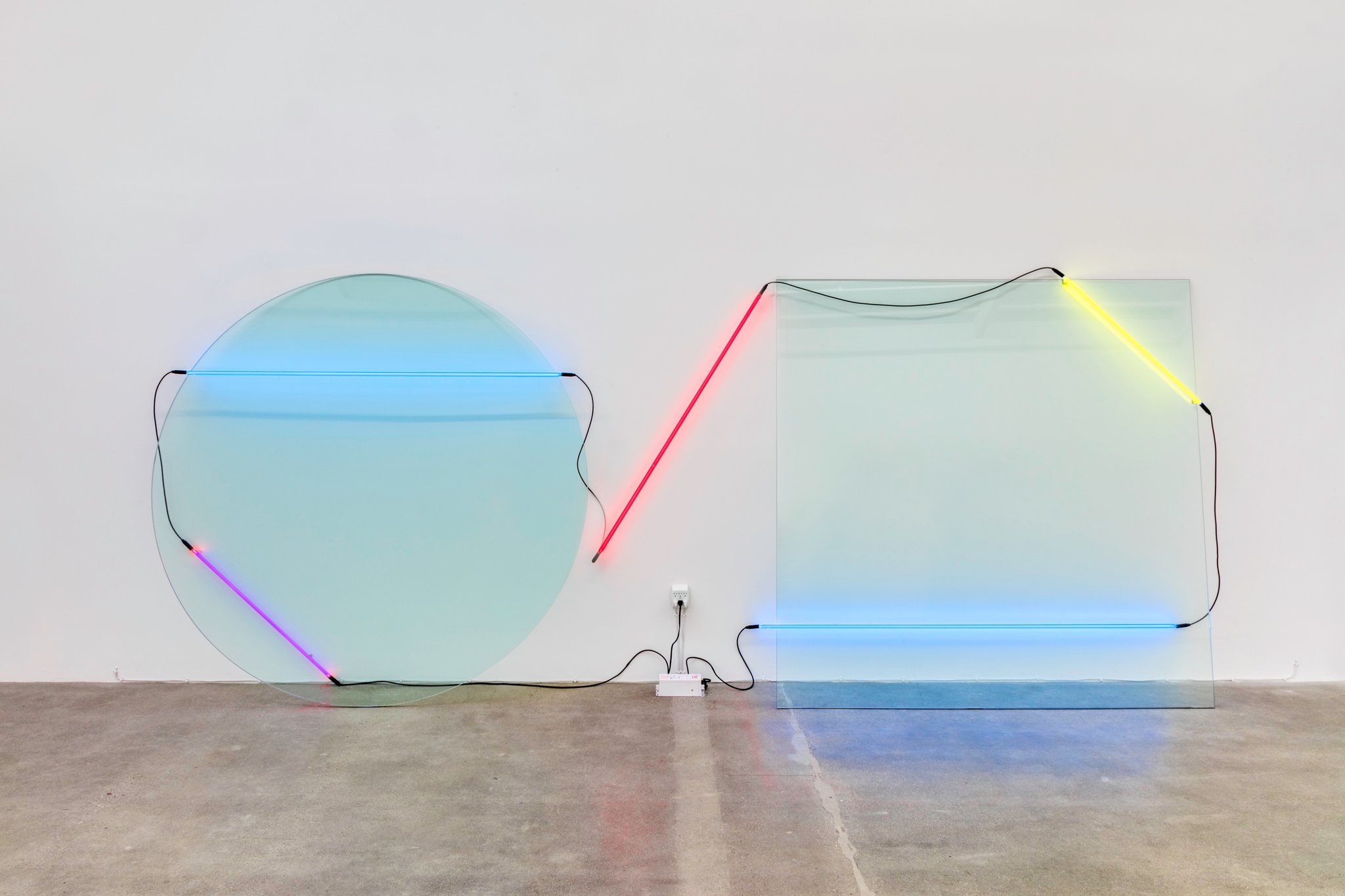 Review by Jason Farago Artwork That Glows Under the Hamptons Sun in THE NEW YORK TIMES.

The New York artist Keith Sonnier, 77, is another pioneer — of a new, luminescent art, though where Flavin and Mr. Turrell preferred pared-down simplicity, Mr. Sonnier favors conjunctions of neon with panes of glass, found objects and technological instruments. He appeared in “When Attitudes Become Form,” Harald Szeemann’s famed 1969 exhibition of postminimal and conceptual art, as well as the epochal Documenta of 1972, and he has not stopped exhibiting since, though attention from American museums has been a few shreds thinner than for some other 1960s pioneers. Many of his most visible works of recent decades have been public commissions. (If you have ever been stuck waiting for your luggage at the Fort Lauderdale, Fla., baggage claim, you will know Mr. Sonnier’s neon curves and straightaways.)

Now Mr. Sonnier is basking in the neon glow of a season devoted to his art on the East End of Long Island. “Keith Sonnier: Until Today,” at the Parrish Art Museum here in Water Mill, is his first American museum retrospective, with more than three dozen works (all that can fit in the museum’s difficult gallery spaces and central hallway), including not just neon works but intriguing sculptures in satin, rubber and bamboo. A few minutes away in Bridgehampton, the Dan Flavin Art Institute — a permanent installation administered by the Dia Art Foundation — has been supplemented with one of Mr. Sonnier’s most significant early works, uniting light, glass, objects and video-documented performance. Both are on view until next year, long after the Hamptons social scenesters will have decamped to New York or continued to Aspen... 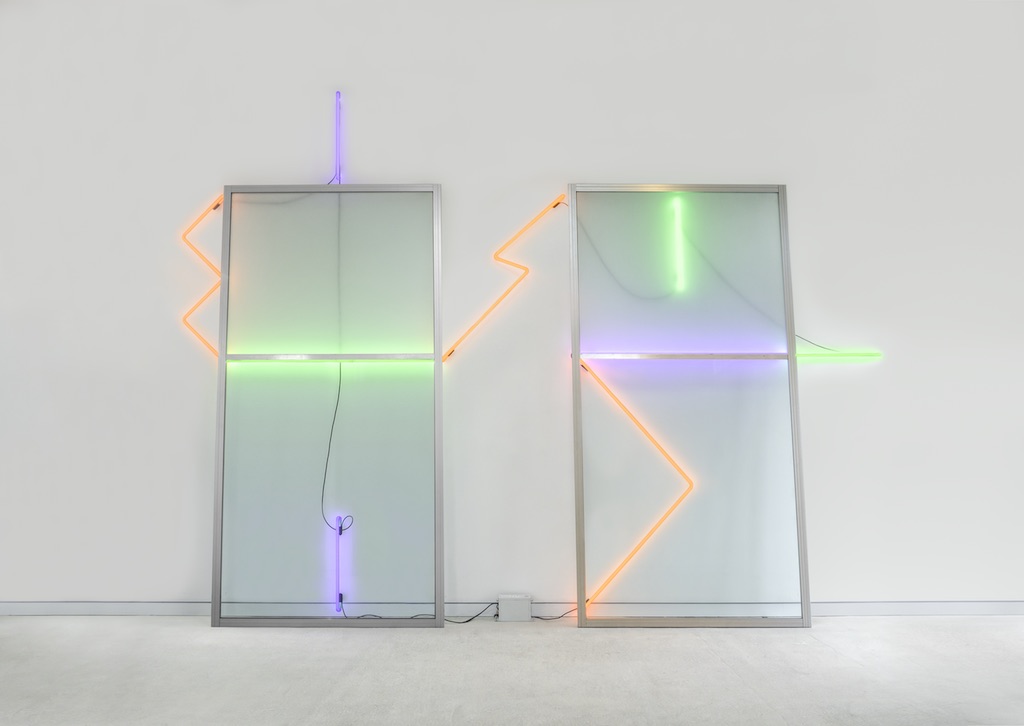 Keith Sonnier came of artistic age in the 1960s, part of a group of artists who created sculpture by experimenting with materials and techniques outside traditional art materials and forms. Sonnier, now recognized as one of America's most influential artists, was one of the first to incorporate light in sculpture—an innovation that forms the foundation of all his subsequent work. Sonnier, who lived and worked in Bridgehampton, Long Island, for more than two decades, has enjoyed broad exhibition exposure and critical attention to his work in Europe. However he has not had a substantial survey exhibition in a major American museum, nor has there been a significant publication addressing his career, his place in contemporary art history, and his contributions to the field. The exhibition is organized by Parrish guest curator Jeffrey Grove, who will also author the fully illustrated catalogue...

Organized by P.S.1 Contemporary Art Center founder, Alanna Heiss, Forty features work by over 40 artists who were key participants in the 1970s alternative art spaces movement and the early years of P.S.1 Contemporary Art Center. In 1976, Alanna Heiss founded P.S.1 as the latest venture in a series of pioneering projects organized through her non-profit organization, the Institute for Art and Urban Resources, which included the Clocktower Gallery in lower Manhattan and other disused spaces across New York City. With both the intellectual and physical room to experiment, nearly 80 artists created work for P.S.1’s inaugural 1976 show, Rooms, which has since become a landmark in the art history of 1970s New York. The artists used classrooms, stairwells, windows, closets, bathrooms, the boiler room, courtyard, and attic—often engaging directly with the existing architecture. Rooms catalyzed changes in the forms and methods of making art, and expanded ideas about how it could be shown... 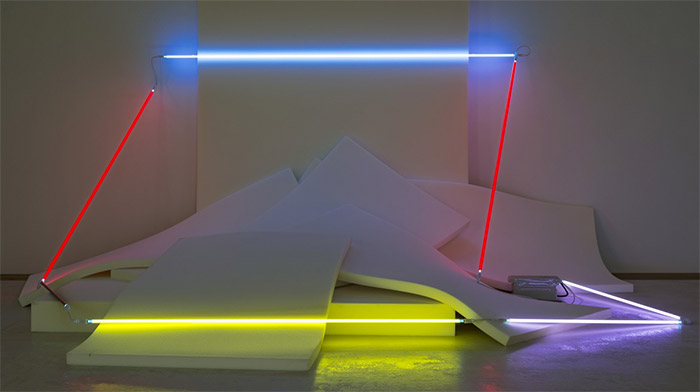 Making three-dimensional drawings with neon, American artist Keith Sonnier (b.1941) bathes spaces and bodies in the radiance of coloured light. Coming of age with a group of artists that included Lynda Benglis, Mary Heilmann, Bruce Nauman and Richard Serra, he uses a post-minimalist language that is physically immediate yet associative... 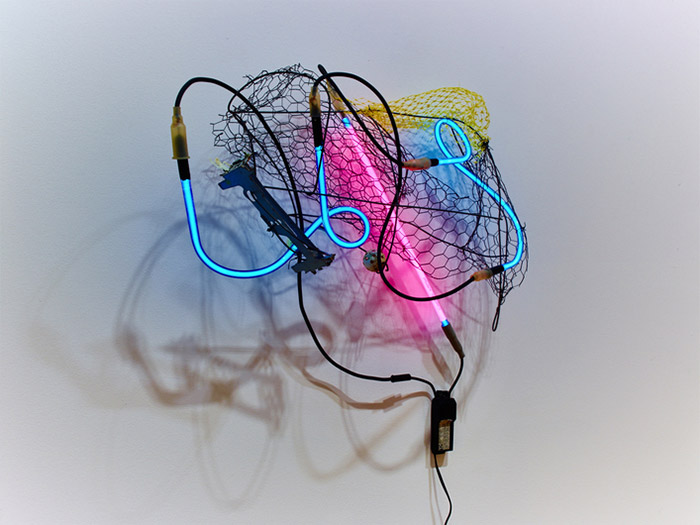 Pace London is pleased to announce a presentation of two neon sculptures by Keith Sonnier in the first floor gallery at 6 Burlington Gardens from 9 to 23 June 2016. The presentation coincides with the Whitechapel Gallery’s exhibition Keith Sonnier: Light Works, which features early neon works by the artist and is on view from 10 June to 11 September 2016. Concurrently, the Tate Modern is exhibiting a 1969 flock piece by the artist in its permanent collection displays. These presentations offer a rare opportunity in London to see works by Sonnier, who is a seminal figure in post-minimalism... 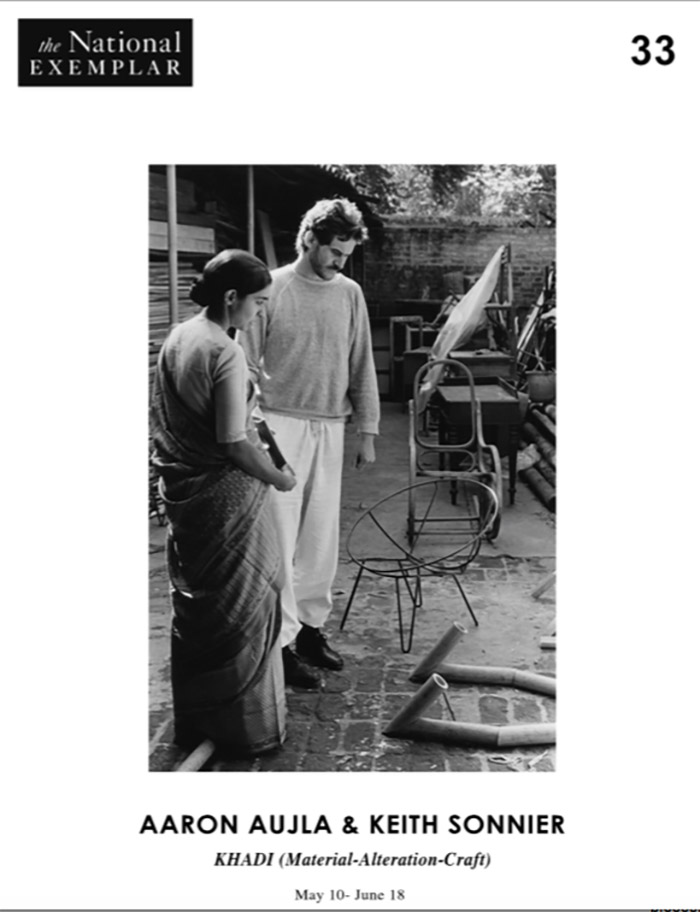 Keith Sonnier at The National Exemplar 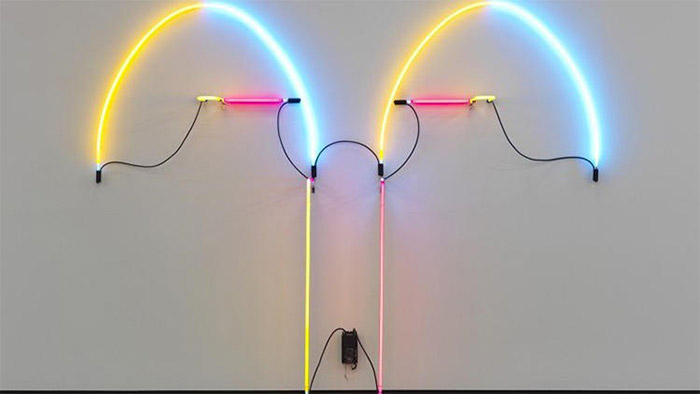 Keith Sonnier calls his new wall drawings in neon, wire and electrical transformers “portals,” and their design motifs and titles do refer to forms from ancient Roman and medieval architecture, often ecclesiastical. Elegant and deceptively simple, they display a masterful hand. Humor is part of the reason why. In 13 recent works at Maccarone Gallery, Sonnier stirs it in with a subtle hand. In these sculptures, the white wall is an idealized plane separating space and metaphorically opened by the glowing illumination of neon color. The shapes are drawn in bent glass tubing and draped wire and they often protrude, sometimes at oblique angles, into the room...

Sonnier’s by-now iconic work is emblematic of a generation of artists who sought to liberate the artistic encounter from the formal constraints of Modernism to produce a sensory and emotional experience that also extended beyond the Spartan affect of Minimalism. The omnibus category of “post-Minimalism,” however, does not adequately describe both the unique wit and visceral impact that his work evinces... 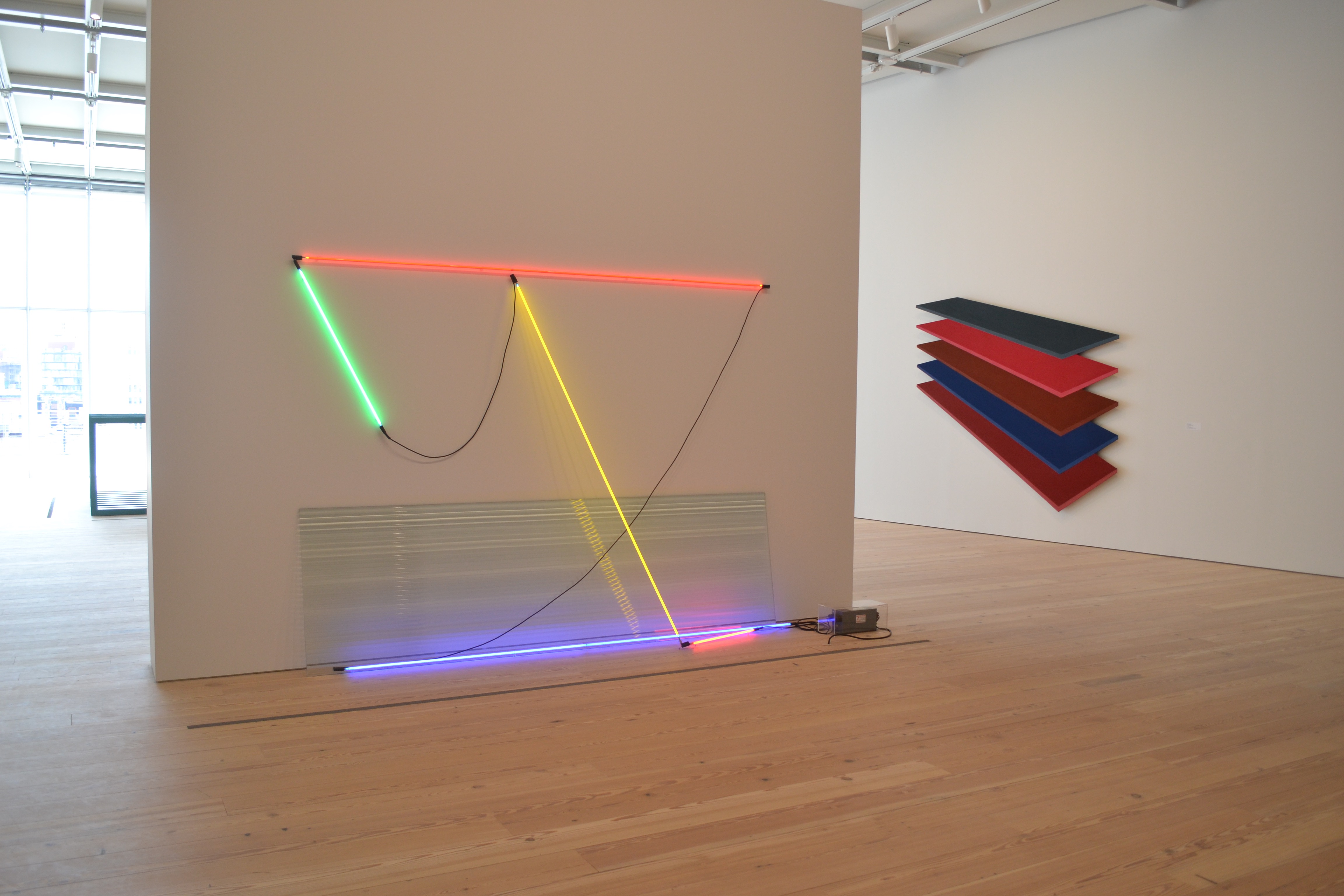 Keith Sonnier at the Whitney Museum of American Art

Included in the inaugural group exhibition America Is Hard To See at the new building of the Whitney Museum of American Art, NYC, NY.

Drawn entirely from the Whitney Museum of American Art’s collection, America Is Hard to See takes the inauguration of the Museum’s new building as an opportunity to reexamine the history of art in the United States from the beginning of the twentieth century to the present. Comprising more than six hundred works, the exhibition elaborates the themes, ideas, beliefs, and passions that have galvanized American artists in their struggle to work within and against established conventions, often directly engaging their political and social contexts. Numerous pieces that have rarely, if ever, been shown appear alongside beloved icons in a conscious effort to unsettle assumptions about the American art canon...