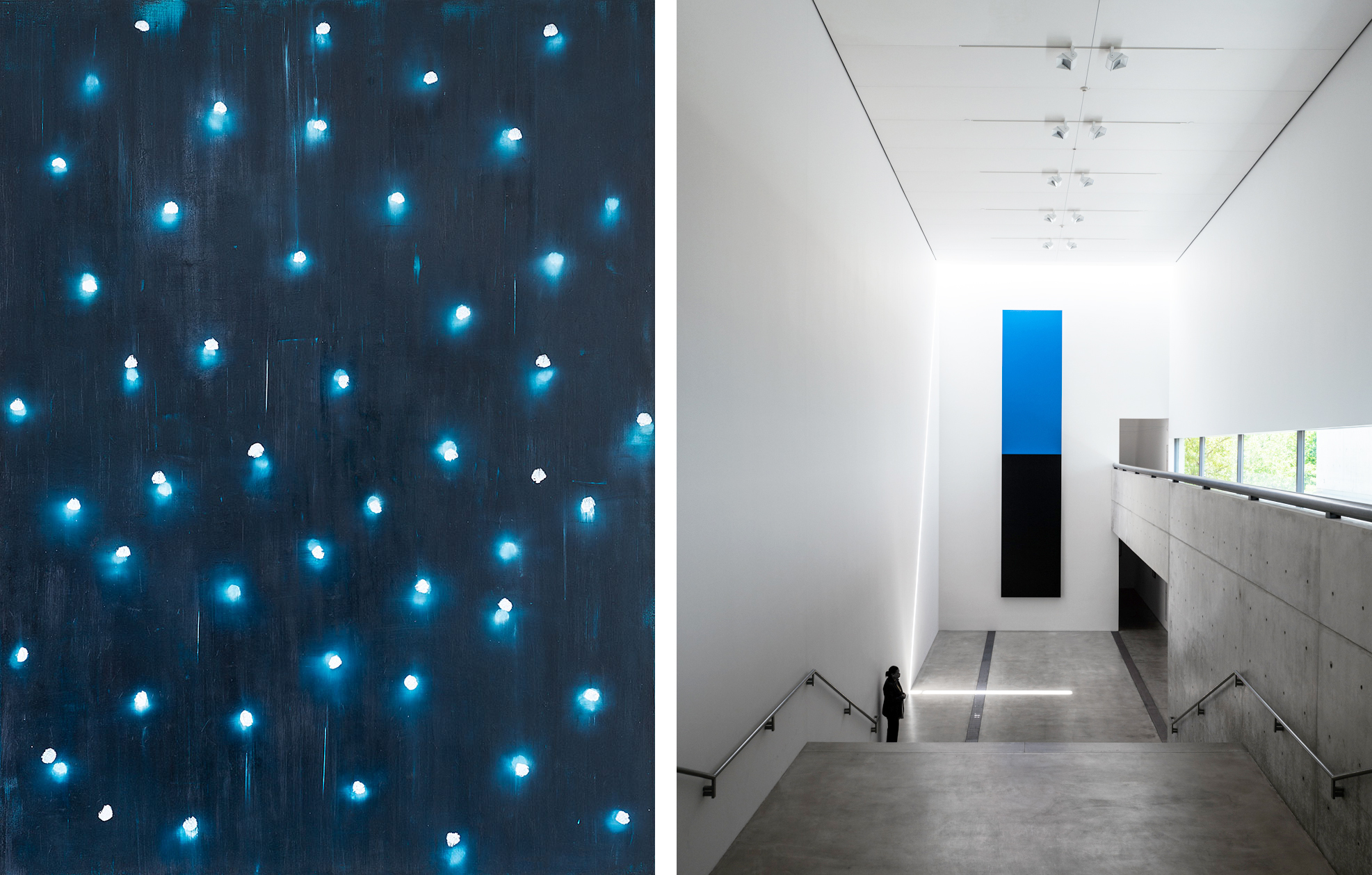 Renowned artist Glenn Ligon (b. 1960) guest-curates a lyrical meditation on blue and black. Inspired by the Pulitzer’s monumental Ellsworth Kelly wall sculpture, Blue Black, Ligon will expand Kelly’s exploration of the two colors with a diverse selection of more than forty works spanning almost a century and touching upon notions of language, identity, and memory. With work ranging from Abstract Expressionist canvases to experimental film, and including pieces by Ligon, the exhibition resists fixed interpretations, instead enlisting color as a means to pose timely and nuanced questions. 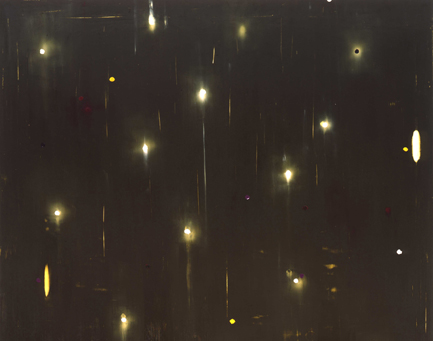 Ross Bleckner at the Whitney Museum of American Art

Included in group exhibition Fast Forward: Painting from the 1980s at the Whitney Museum of American Art, NYC, NY.

Fast Forward: Painting from the 1980s takes a focused look at painting from a decade associated with the arrival of new media and the rapid growth of the contemporary art world. Drawn entirely from the Museum’s deep holdings of this period, this exhibition presents work by Jean-Michel Basquiat, Ross Bleckner, Eric Fischl, Elizabeth Murray, David Salle, and Terry Winters, alongside work by less-familiar artists such as Moira Dryer, Joyce Pensato, and Julia Wachtel. While considerable attention has been given to the decade through artists’ use of appropriated imagery and photographic sources, the exhibition examines this moment specifically through the lens of painting, considering the ways in which the medium was reinvigorated throughout the decade at a time when its relevance was fundamentally challenged... 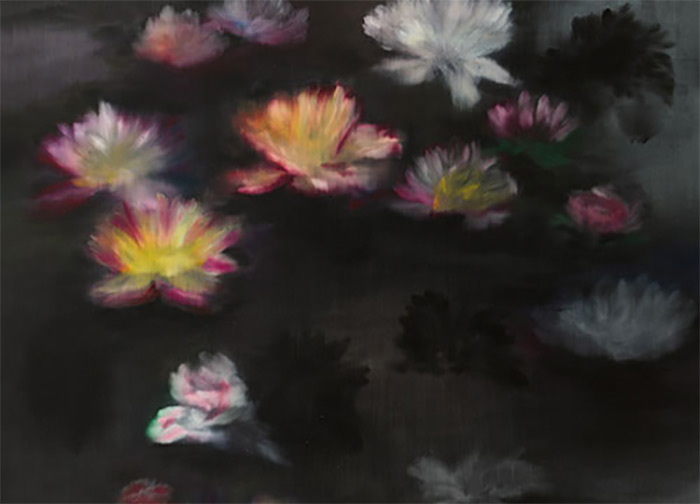 Solo exhibition Find a peaceful place where you can make plans for the future at Dallas Contemporary, Dallas, Texas.

Ross Bleckner is known for painting a spectrum of subjects—from pulsating lines in his resurrection of Op art in the 1980s to the magnified cellular structures of autoimmune diseases in the 1990s and newer contemplative works from the past few years. Bleckner’s Dallas Contemporary exhibition takes its title from a fortune cookie. Under this prophetic umbrella, the artist presents paintings of landscapes, crowds, flowers, architecture, and birds, all from the last two years. Together they function as memento mori—a meditation on memory and loss... 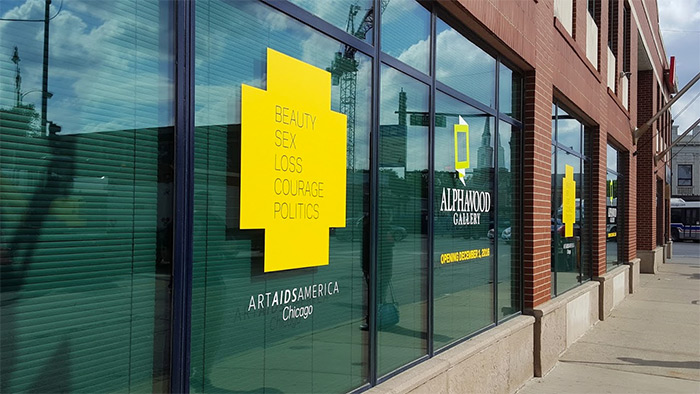 This groundbreaking exhibition underscores the deep and unforgettable presence of HIV in American art. It introduces and explores the whole spectrum of artistic responses to AIDS, from the politically outspoken to the quietly mournful, surveying works from the early 1980s to the present... 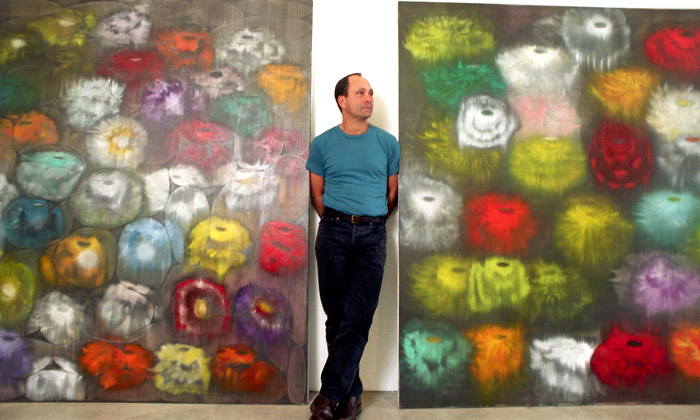 Ross Bleckner in The Guardian

Article by Jonathan Jones Someone Please Give Alec Baldwin a History of Art Lesson in The Guardian. 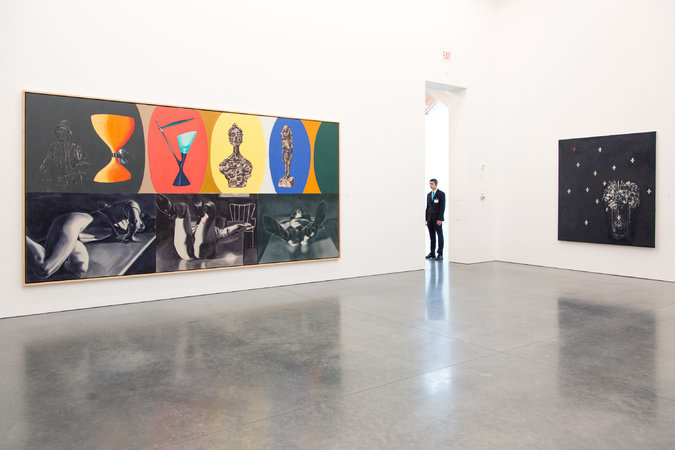 Article by Ken Johnson Searching for Light in the Darkness of the '80s in The New York Times.

For contemporary art in America, the 1980s was an exciting if not lovable decade. Arguably it was second only to the 1960s for ambitious innovations of style and thought. Consider Julian Schnabel’s brawny Neo-Expressionist paintings, Cindy Sherman’s canny, staged self-portraits, Jeff Koons’s sumptuous sculptures of kitschy objects and Barbara Kruger’s suavely designed leftist agitprop: The ’80s abounded in eye- and mind-grabbing work.

In contrast to the future-oriented euphoria of the ’60s, however, the mood of art in the ’80s was retrospective and darkly rueful. With AIDS taking the lives of many in the art community and a conservative president, Ronald Reagan, in the White House, reasons for optimism apparently were few.

That downbeat feeling is stirringly conveyed by “Unfinished Business: Paintings From the 1970s and 1980s by Ross Bleckner, Eric Fischl and David Salle,” an exhibition of paintings and drawings by three artists who rose to stardom in the ’80s, at the Parrish Art Museum in Water Mill, N.Y... 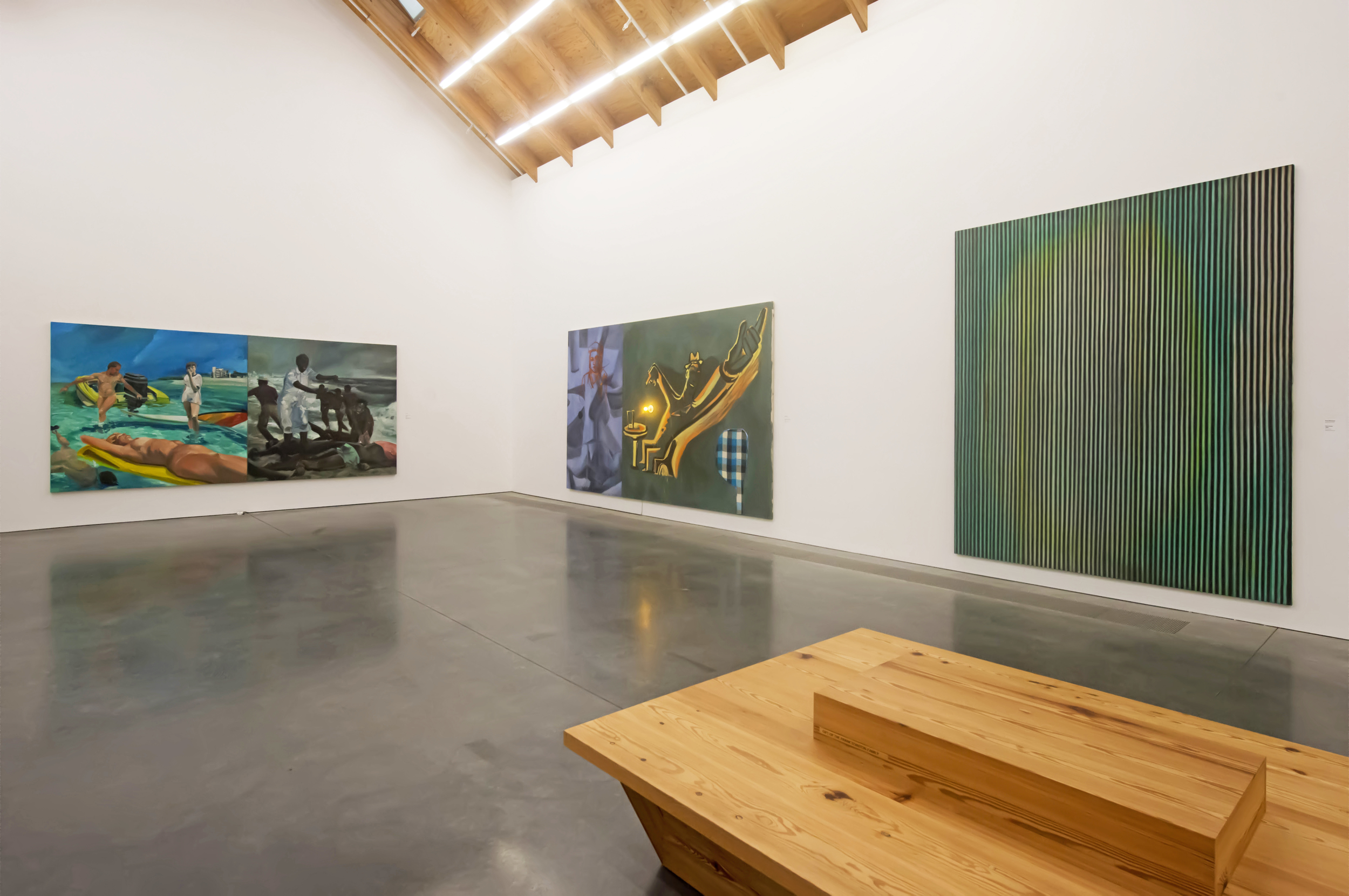 Unfinished Business: Paintings from the 1970s and 1980s by Ross Bleckner, Eric Fischl, and David Salle features the work of three artists who met in the early 1970s at the California Institute of the Arts in Los Angeles before moving to New York in the 1980s, where they immediately established careers as influential painters. At a time when painting was thought to have passed its prime, Ross Bleckner, Eric Fischl and David Salle discovered, in its materials and conventions, a medium rife with possibilities—particularly for artists interested in doing something original, and ambitious, with its history. Unfinished Business explores the distinct styles, philosophies, and convictions of the three painters. Featuring 23 large-scale canvases and 17 works on paper, the exhibition outlines the development of each painter’s formal vocabulary while suggesting deep connections between and among the works of all three... 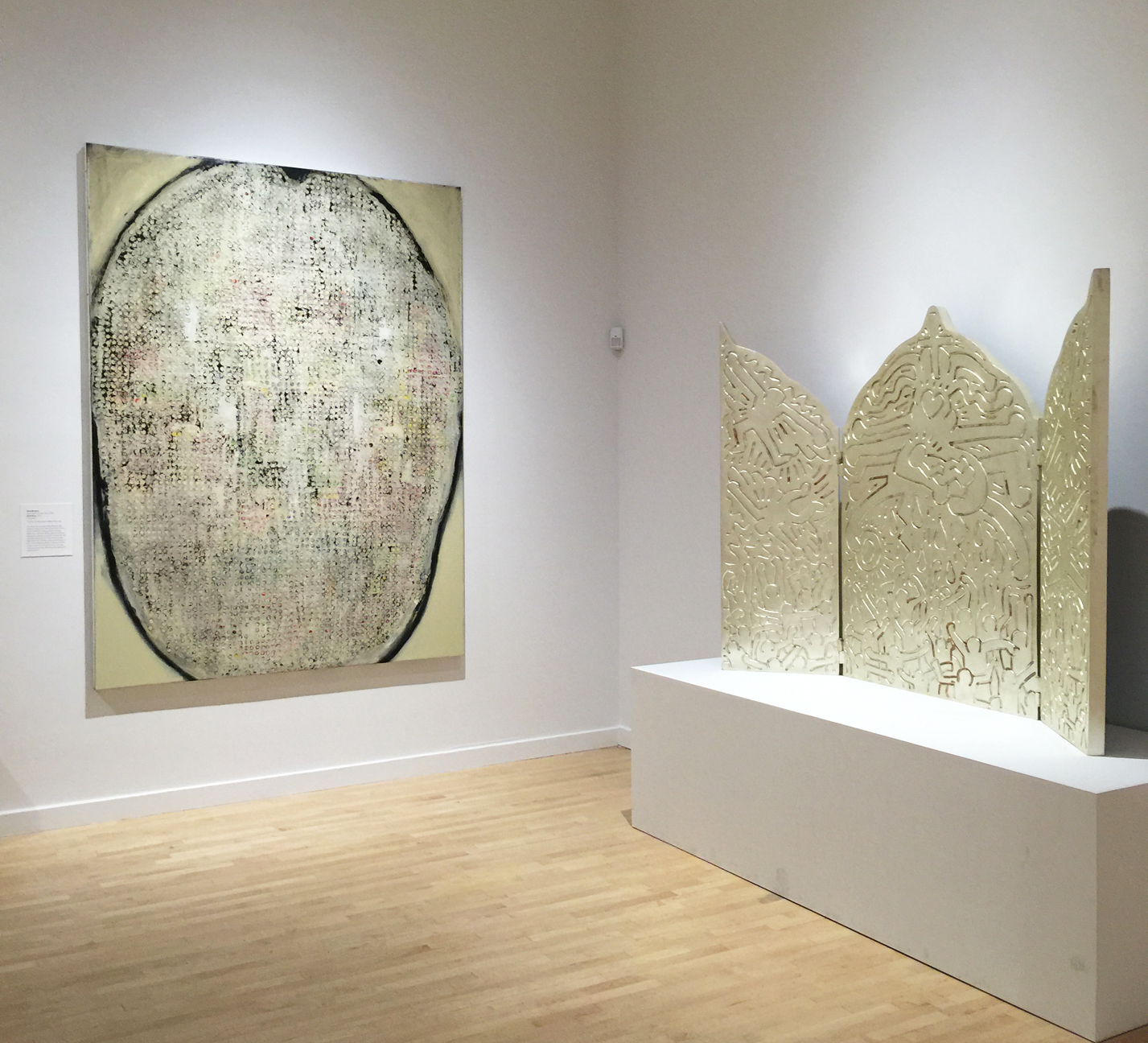 Ross Bleckner at the Bronx Museum of the Arts

This summer The Bronx Museum of the Arts will present Art AIDS America, the first exhibition to examine the deep and ongoing influence of the AIDS crisis on American art and culture. The exhibition will feature more than 125 works in a wide range of media dating from 1981 to the present day, by artists including Félix González-Torres, Derek Jackson, Kia Labeija, Annie Leibovitz, Robert Mapplethorpe, and Martin Wong. The exhibition, on view from July 13 through October 23, 2016, is organized by the Tacoma Art Museum in partnership with The Bronx Museum of the Arts... 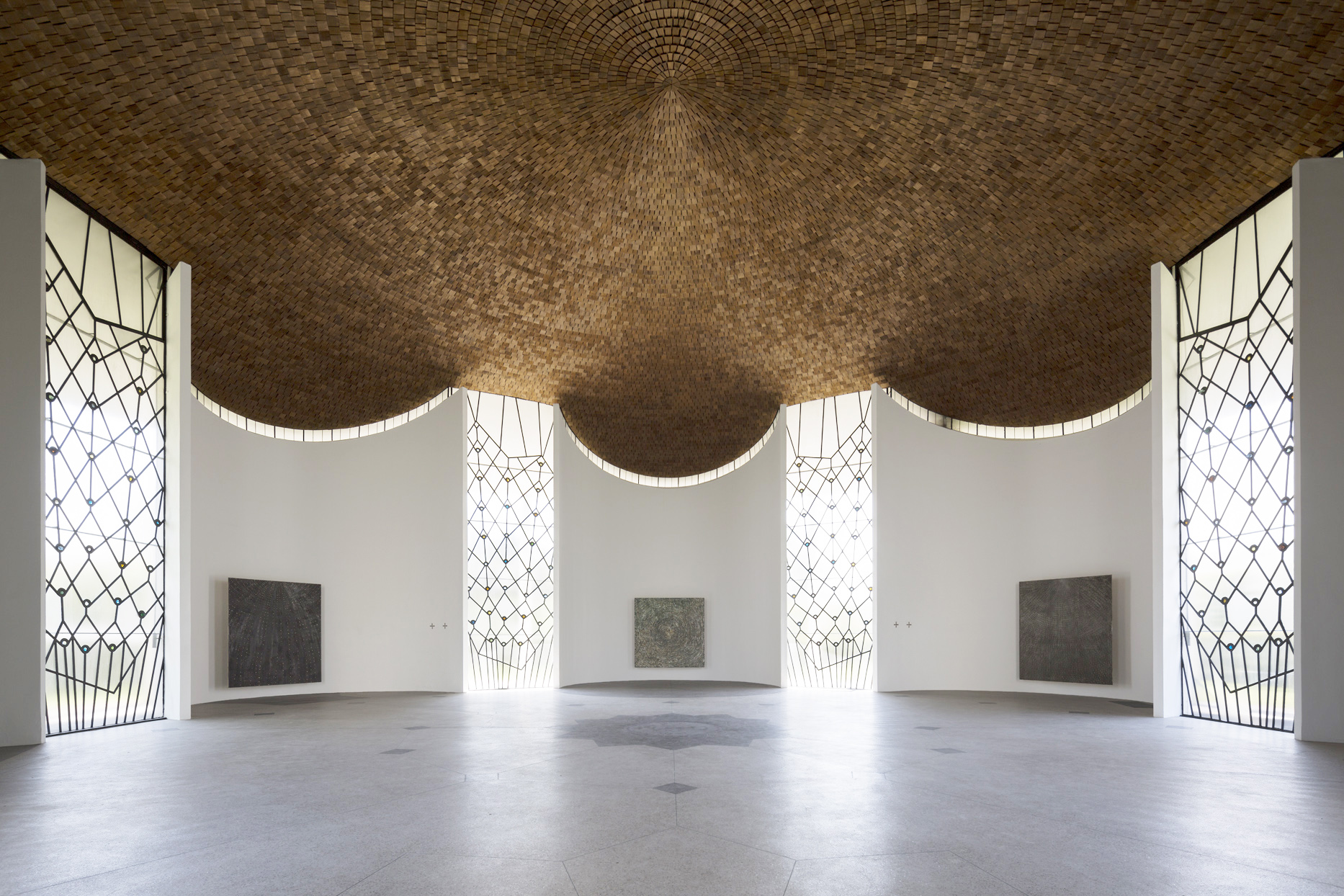 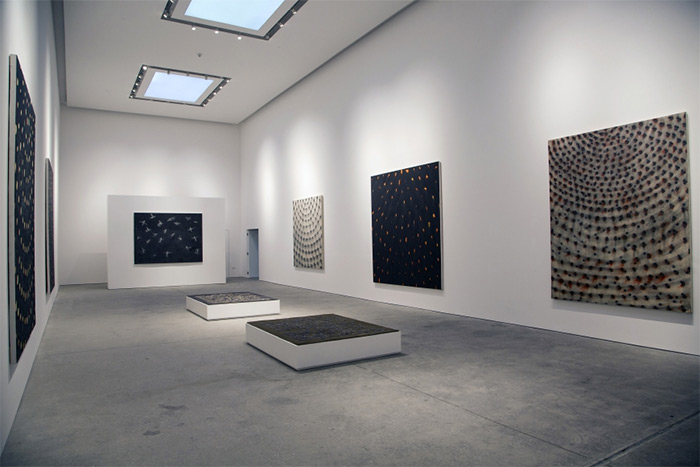 Leila Heller Gallery Dubai is pleased to present an exhibition of new work by Ross Bleckner from April 29th to June 15th, 2016. The artist’s first major exhibition in the region features ten large-scale paintings as well as smaller canvases, wherein according to the artist, “the architecture of place meets the architecture of the sky”, revealing phenomena of paint and light, in an oeuvre teetering between a call for salvation and a silent abyss... 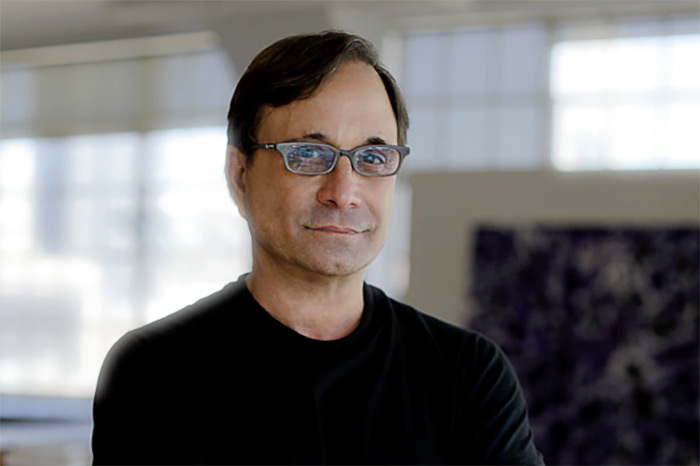 Article by Laura van Straaten 80s Art World “It Boy” Ross Bleckner Is Having a New York Moment on Artnet.com.

New York artist Ross Bleckner has work in six new shows on now or opening soon, including his first solo show in the Middle East, opening in April at Leila Heller Dubai, followed by what is sure to be the art happening of the Hamptons this summer, a group show that unites him with his fellow 80s art-world it-boys David Salle and Eric Fischl at the Parrish Art Museum on Long Island...